What does Lymphatic Drainage treat?

So one of my very favourite pieces of equipment is my Electro Lymphatic Drainage machine. It’s one of those things I use all the time but I don’t seem to talk about it very much, maybe because it has such an awful name! Contrary to what the name implies it doesn’t hurt, I don’t stick anything into you, yes it does use electricity (but so does my computer and my phone!) and, I really really must stress this, NO ONE sticks anything up anywhere!!!!! You know what I mean, you thought it too.

So what does it do? Lots is the short answer. These are some of the things I have successfully treated with it:

Back/muscle pain – I work in hour long appointments. When someone’s muscles are really tight and hard sometimes it takes me almost this long to soften up the “top” layer using manual techniques so that I can actually get to the problem and treat it. What my fabulous machine does is soften and relax the muscles faster and more comfortably so that I can spend more time treating the actual problem. It also reduces inflammation and stiffness so patients feel a greater effect over a longer period. Win win I think.

Joint pain/injury – one of the biggest barriers to healing is inflammation. This swells the surrounding tissue blocking the “good” blood coming in and stopping the “bad” toxins from leaving. Ice helps a huge amount (yup, got a cryotherapy machine as well!) but my electro lymphatic machine works even better. So a hot, sore, swollen knee becomes more comfortable, which means we can move it and exercise it and reduce healing time.

Reduces scarring – scar tissue is a common side effect after surgery, both cosmetic and medical. But scar tissue is often tight and uncomfortable, reducing movement and causing its own issues. And of course it generally doesn’t look that great, especially frustrating after cosmetic surgery I think! I’ve had fantastic results reducing scar tissue with my Electro Lymphatic Drainage machine, again it reduces the inflammation, allows the “good” blood in and gets the toxins out, effectively restarting the healing process in these places. Will they disappear forever? Maybe not, but they might become almost invisible and a lot more comfortable.

Breast pain and period pain – Bad period pain is often caused by endometriosis, in effect excess swelling and inflammation of the tissues in and around the womb. Unreliable cycles are often caused by polycystic ovaries, little cysts that grow within your ovaries. Pre menstrual breast pain is often caused by fibrocystic breasts. The common factor? Yup, inflammation and swelling. When the lymphatic system gets overloaded and can’t get all of the toxins out of the system it neatly packages them up and puts them in a cyst so that it can “come back later” for them. If the system continues to be overloaded it just adds more and more into this cyst . . .  which gets bigger . . .  and puts pressure on the surrounding tissue . . . which starts to be painful and swollen . . . . so the system becomes more overloaded . . . . You see where I’m going with this. Once again if we reduce the swelling and the inflammation, get the system working so its not so overloaded, we can actually reduce the size of the cysts and the endometrial swelling. So you get less pain. 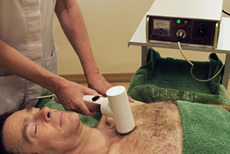 I actually could probably list about a dozen more examples but I think this is probably enough for one day! Hopefully you now understand why I love my clunkily named Electro Lymphatic Drainage machine! Oh and, just to set your mind at rest this is what it looks like when I’m treating someone. See, told you no one was going to stick anything anywhere! The drainage part? Well, you pee it out.

Just as a side note, obviously most of the conditions I’ve mentioned above are more complicated and often require a combination of treatments. I’ve been deliberately brief and light hearted. If you did want to discuss in detail how I can help please do email me [email protected] or call me on 952 883 151 or send a WhatsApp to 699703936

This site uses Akismet to reduce spam. Learn how your comment data is processed.

Got a complicated question? Want to make sure you are seeing the right person? Need more information? Book your FREE 20 minute telephone consultation with our expert team to answer your questions.

We use cookies on our website to give you the most relevant experience by remembering your preferences and repeat visits. By clicking “Accept”, you consent to the use of ALL the cookies.
Cookie settingsACCEPT
Manage consent

This website uses cookies to improve your experience while you navigate through the website. Out of these, the cookies that are categorized as necessary are stored on your browser as they are essential for the working of basic functionalities of the website. We also use third-party cookies that help us analyze and understand how you use this website. These cookies will be stored in your browser only with your consent. You also have the option to opt-out of these cookies. But opting out of some of these cookies may affect your browsing experience.
Necessary Always Enabled
Necessary cookies are absolutely essential for the website to function properly. This category only includes cookies that ensures basic functionalities and security features of the website. These cookies do not store any personal information.
Non-necessary
Any cookies that may not be particularly necessary for the website to function and is used specifically to collect user personal data via analytics, ads, other embedded contents are termed as non-necessary cookies. It is mandatory to procure user consent prior to running these cookies on your website.
SAVE & ACCEPT